We are sitting in our guesthouse in Bukhara after a beautiful day. We have been wandering through mosques and medrassas and up and down minarets with our mouths open, gaping at the ancient architecture, the extraordinary stone and tilework and picturing the history, fair and foul, that has passed through this silk road town. All of the usual suspects were here – Marco Polo, Genghis Khan etc. – as well as the famous Stoddart & Conolly, two English army officers whose handlebar mustaches and Victorian stiff upper lips didn’t prevent them from being inventively and lengthily tortured then straightforwardly killed for breaches of local etiquette. It’s pretty stirring stuff.

Our guesthouse – an atmospheric old Emir’s palace, with heavy wood-beamed rooms surrounding a shady central courtyard and a jewel-like breakfast room complete with carved plasterwork, lavishly painted ceilings and tiny plates of brightly coloured jams – is unfortunately full of retired French and German tour groups. So far so standard: many of the people we meet on the road are retirees, Lufthansa has good connections to this part of the world from Eastern Bloc days, and Central Asia seems to have a special allure to those who did their original travel dreaming back when the Iron Curtain prevented them from imagining they would ever actually get here. That said, the tour groups don’t bother us much, until…

My spoken French is pretty rusty at the best of times, but this IS the best of times – for some random reason many of the guest house owners and taxi drivers in Uzbekistan speak French not English. Given that French is also the lingua franca (ha ha) of half of Vanuatu, I have been speaking more French recently than I have in years. As such, I understood the elderly French lady perfectly as she walked past, and even picked up on the heavy note of disdain.

“Poor thing. He’s having to sew up his shoes!”

That’s right lady. I’m sewing up my shoes. Running repairs are a necessity on the road when you have a limited set of clothes – so far I have handily put a stitch or two in one jumper, one wooly hat with a llama on it, one set of thermals, two t-shirts and one busted rucksack flap. In a moment of train-journey-inspired boredom I even darned one solitary sock. I have also had an Oswald Boateng shirt rehemmed by a little old lady in Port Vila with an even older Singer sewing machine.

I imagine in retired-French-lady-land one would simply buy another pair of shoes. And in my-partners-and-I-sold-an-investment-bank-last-year-land I normally would too. But these are New Balance barefoot running shoes. Not at all expensive, but very, very carefully chosen, and perfect – they are extremely lightweight, offer surprisingly good support and (critically) pack down to the size of a flip flop. In New York I swapped out the laces for black replacements and delicately trimmed off all the lime green decals, so they can just as easily be used as coral reef shoes in the morning and get you past the doorman of a cocktail bar that night. They are dark red, and hence go with every outfit I currently possess. They are, as I said, perfect travel shoes.

But … replacements are not available within a thousand miles of Uzbekistan, and after four months of swimming, walking on coral reefs, hiking and dancing they have a hole in the canvas upper.

So yes, lady, I am sewing up my shoes, whether you think I look like a tramp or not. And a damn good job I am doing of it too. 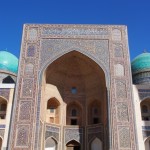 THIS is what it is all about. Statement architecture, Central Asian style 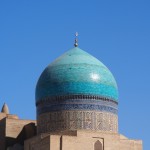 The Uzbeks have 42 different words for blue. Honest, officer 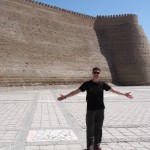 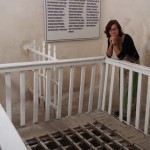 The famous bug-pit torture chamber. Lucy gets all wistful at this point 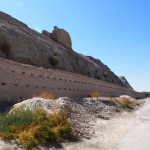 The Registan walls. Lucy would wax lyrical about the unrestored vs. restored issue right now, but this is MY post. Mwahaha! 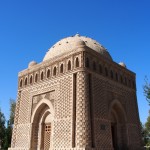 The oldest building in Bukhara, and our favourite – a stripling at 1,107 years old 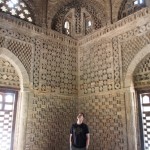 It’s surprisingly light and delicate, seeing as it has walls two meters thick (and is a mausoleum) 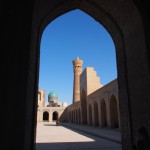 The by-now-obligatory artistique shot. You know you love it really 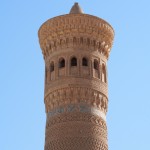 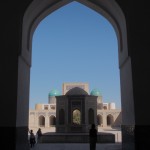 We had our first wedding planning chat here. So far, we are decided on LOTS of excellent booze 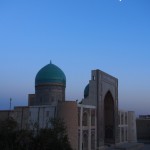 Watching the sun go down – toasting the call to prayer with two pints of beer. Perfect, if not very Islamic 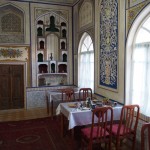 3 thoughts on “James Learns to Sew”