So, we finally move on to the Mount Hagen Show. The show, or Sing Sing as it is called locally, was one of the main reasons, if not the main reason, for us coming to Papua New Guinea. It was certainly why we were in the country on this date (and it had been difficult to schedule our flights around it) so we had dangerously high expectations.

ALL of which were met. The Mount Hagen show is absolutely, jaw-droppingly amazing. Hopefully the 20 photographs below (culled after long discussion and at great emotional expense from an initial 330 photos) will do the place some justice.

You stand in the middle of a rugby pitch surrounded by several hundred performers, all dressed up to the nines in banana leaves, bird of paradise feathers, full body makeup, masks, drums and sticks. All of them are dancing and swaying and marching and singing their hearts out.  It goes on for two full days. It was only after a few hours of being overwhelmed by all this that we found out that half of the performers had actually stayed away. You see, their party had won the recent parliamentary elections, and they had stayed away for fear of violent reprisals from the losing side (welcome to PNG!).

The routine of the festival starts early in the morning, watching the performers arrive on the backs of buses and trucks and slowly metamorphosing from their usual street clothes into their performance costumes. Slowly the singing and dancing grows, before each group parades into the arena and joins an ever growing throng of pulsating, vibrant colour. At about 2pm the tourists and performers disperse – the tourists back to their enclosed hotels, the performers back into the surrounding shanty towns, from which loud chanting and singing can be heard late into the night. Despite Mount Hagen officially being a dry town (particularly around election season) the home brew industry must do a good trade at this time of year.

Alongside a relatively virulent strain of photographer tourist (see elsewhere) Mount Hagen also attracts a fascinating group of world travelers, amateur anthropologists and others attracted by interesting and difficult places. Our dinners in the evening were full of tales of tribal village stays in the 1960s, bushwhacking through WW2 trails in the deepest, darkest South Pacific and the occasional glancing reference to life on the ground during the Vietnam war. All pretty eye opening and awe-inspiring for a couple of humble office workers, I can tell you.

We wouldn’t have missed it for the world. 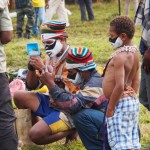 Getting ready for the big performance – the white is Tippex, by the way 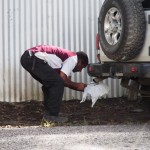 Many ancient dyes and colours are used including, erm, exhaust soot 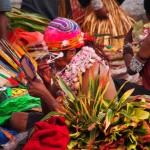 Even while getting ready the performers were a blaze of colour 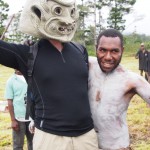 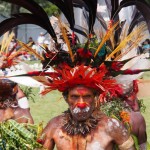 Awesome Old Dude. Old dudes are to Mount Hagen (and country music) what fat chefs are to cooking 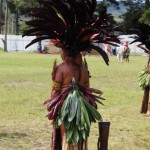 ‘Did you see those feather dancers? Like, erm, Tropicana dancers gone to seed’ 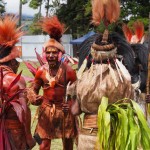 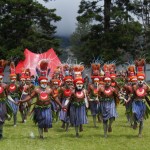 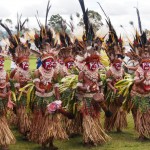 In the highlands, sea shell necklaces are the most valuable possession and status symbol, which Australian gold miners used to their great (and unfair) advantage 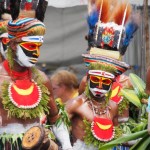 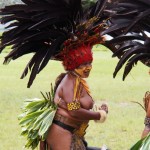 A riot of colour and movement and noise. And boobies 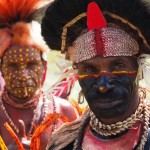 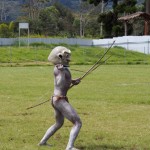 The Mud Men. They didn’t so much dance as freak the hell out of people 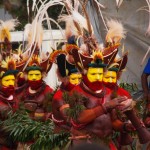 The Tari Wig Men. Possibly the butchest wig-wearing men on the planet 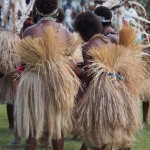 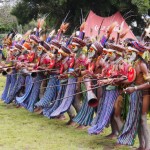 The Kilt Dancers. They carefully explained that there were three main types of dancing – standing in line, dancing in circles and jumping up and down 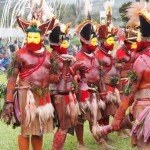 Masters of the “jumping up and down in straight lines” dance. Awesome 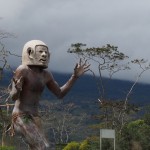 I want one of these for halloween. Just before we bought one we discovered they are made of unfired clay and don’t travel at all well 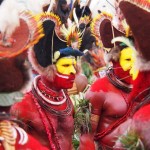 I may try to steal this man’s facial expression for next time I want to, oh, sentence someone to death 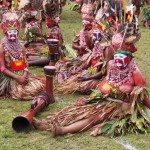 After the party. The expressions say it all

3 thoughts on “The Mount Hagen Show”