On our first night in Pyongyang we were hustled on to a bus and driven to the May Day stadium for the Arirang Mass Games – the very-much-anticipated highlight of our trip to Korea was going to be pretty much the first thing we saw. As ever, we were worried that an event we organised our entire eight months off around might not live up to our extremely high expectations.

We needn’t have worried – it was extraordinary. I can’t say that you should go and see it yourself – unfortunately this year was the last year of the Arirang, to be replaced next year by something else, no doubt also involving 100,000 spookily-drilled performers. We just opened our eyes wide, sat back, forgot about all the overtones and undertones, and enjoyed the show. 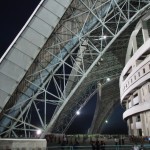 The May Day Stadium. Huge. Looming. Rather impressive. Like the entire show 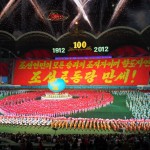 Actually the finale, but a good introduction to what the Mass Games looks like 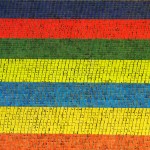 A close up of the backdrop – can you see the individual schoolchildren? 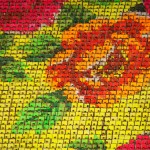 They don’t just make pictures – they actually animate them too 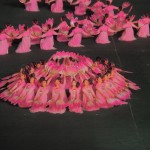 It’s not too overwhelming if you look at it close up – like ballet, really 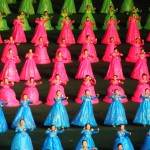 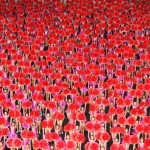 Can you imagine what it must be like to grow up doing this kind of thing and thinking it normal? 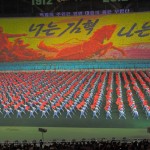 Can you imagine how the sort of training you need to perform like this must rub off in your everyday life? 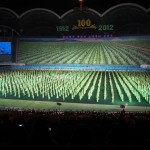 Perhaps it actually achieves its purpose of creating true harmony, and joint efforts for the good of the country 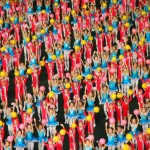 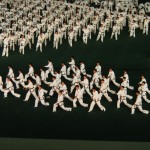 It’s a philosophical point, but perhaps there is only so far you can get by ignoring individualism 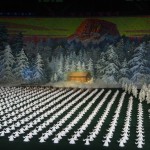 Although you do get pretty patterns. Ah, snowflakes. Kinda pretty, kinda terrifying 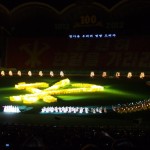 And you get to reinforce some strong ideas, like the importance of The Party 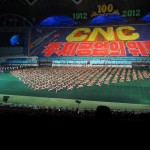 And also of Computer Numerically Controlled (CNC) manufacturing. There is actually a popular dance named after it – I kid you not 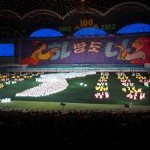 And the benefits of reunification (although can you imagine South Koreans enjoying being made to do this?) 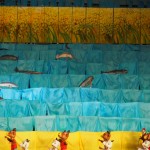 These are fish, swimming up the newly constructed salt water canal to Pyongyang for the glory of the people. And dinner 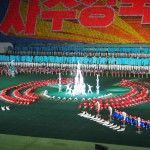 These are gymnasts, swinging round newly constructed poles for the glory of the people, etc etc. 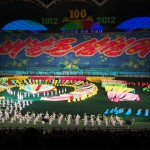 It was all like this. It went on for more than an hour. It really gets to you after a while 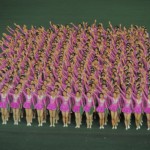 A cheery goodbye. So much more charming when waved by multiple regimented blocks of 400 girls in pink skirts 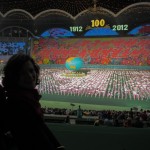 Lucy afterwards. If you look carefully, you can see her brain melting out of her ears