One of the lighter points of relief, at least from my perspective, during our trip to North Korea, was our visit to the USS Pueblo. Most of you reading will have no idea what the USS Pueblo was or what it represents, but to the North Koreans, the capture of this US “spy ship” (“scientific research vessel” under US terminology – as ever, who really knows the truth) inside (or, again per US version, just outside – truth where art thou?) the country’s sovereign water represents the singular high point in the country’s continuing anti imperialist battle since the Korean war armistice was signed.

As an aside, the North Korean view of the Korean war is pretty simple – the American aggressors aggressed (in some manner never very clearly specified, presumably having to do with the fact that there were US troops on the ground in South Korea but who knows), the DPRK troops retaliated and ultimately conclusively won the campaign, in the only known defeat of US forces. The Korean war is a sufficiently grey and murky zone that you’ll hear quite loudly my total non-comment on this subject, other than to say that this particular telling might not be so widely recognized in the West.

You can understand, though, with that background, that the DPRK was pretty excited, after its unprecedented whipping of the US Army in the war, to then also be able to capture one of its spy ships, including all the crew bar one who tragically was killed during the boarding process; for said crew off their own bat and with no undue pressure to then author and sign a confession of their transgressions; and for America to issue a statement confirming that Pueblo had been spying, and an assurance that the U.S. would not spy on DPRK again in the future, in return for the release of the crew. (Again, just to avoid charge of bias, the US version here is that the crew members were imprisoned, starved and tortured; and that the Pueblo commander eventually signed a confession under threat of having his entire crew executed in front of him). And the whole thing does look pretty damning, really, what with the large tiers of radio equipment on board, plus the battleship grey colour of the ship – I mean what research vessel do you know that’s painted battleship grey? Although of course it wasn’t at the time of capture, that’s just a paint job put in place by the DPRK for added authenticity…. 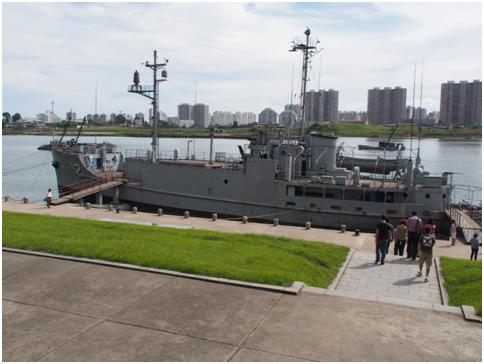 Anyway, lighter point of relief, I hear you ask somewhat quizzically? Well, yes. Despite the difficult and possibly quite tragic backdrop to the affair, the tour of the vessel was fabulous. “Here is the radio room from where the imperialist spies unlawfully gathered secret information on our country – but to no avail.” “Here is the bridge from where the cowardly imperialist captain surrendered his vessel. Acknowledging our [DPRK's] superiority, he immediately confessed to us the number of crew people on board.” And, my personal favourite, during the video describing the whole affair, “The American imperialist was so confused [during the occasion of signing up to the agreed US confession] that he FORGOT to date the document!!”. It’s like something from a bad comedy, with a sturdy uniformed lady DPRK soldier as your charming hostess. It was all just so refreshingly, honestly, un-reconstructedly cold war. This is a country that’s still very much at active war with America, if only America would notice.

Plus you get to play with the machine gun. It’s the perfect day out for all the family. 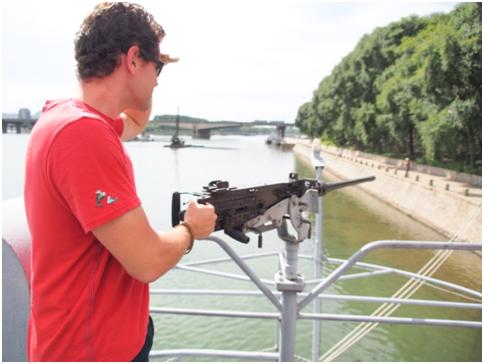 I could have sworn I saw a capitalist just now…