OK, so the title may need a little explanation. Heffalumps, of course, require no explanation whatsoever. Assuming, of course, that you are English and have been brought up on a sensible diet of weak tea, buttered crumpets and Winnie the Pooh. If, however, you are deep in the wilds of Myanmar talking to a highly educated local doctor with an inquisitive mind and persistent manner then referring to a passing elephant as a heffalump requires a half hour discourse on A.A. Milne, the beauty and wonder of childhood, the geography of the 100 Acre Wood and the gender of piglets. It also leads to difficult questions like “How can you be sure that the heffalump was an elephant?” and “What is the role of the donkey? And what was he doing in the hole?”.

Hang on, elephants? Anti-completism? What?

We are still in Myanmar, and it is before Christmas. We are on the point of turning for home, and our travel has taken on a certain character. We started the trip many moons ago in May, happily sightseeing everything in our path, making sure that we wrung the very best from each place we saw. It was amazing, it was enlightening, it was deeply satisfying, and it was exhausting. More recently, we have become a little … anti-completist. The mantra of the anti-completist is: “what is it about this specific place that we cannot see anywhere else?” It’s not pure laziness, although this has a little to do with it. It’s more that, having seen thousands of Bhuddas, hundreds of temples, dozens of endangered and endemic species at arms’ length, various tribal gatherings, the world’s highest point, deepest canyon, weirdest industrial accident, fattest tourist and best leaving party, we are becoming – erm – a little harder to impress.

Having shunned a few gold-encrusted temples (blah), the last of the anti-completist must-dos in Myanmar was a trip to a working elephant camp in the teak forests near Taungoo, where we were shown round by the above mentioned local doctor – tour guide by profession, free clinic provider and general all round saint in his spare time. The photographs below will tell the story better (and certainly more succinctly) than I could. Let’s just say that waking in a rangers’ hut on the edges of the jungle, tramping through the bush on the back of a working elephant, cutting down a huge teak tree and hauling the thing back on chains to base camp was a real privilege. Consider us impressed. 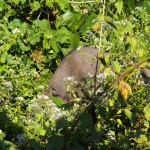 I wonder what that is… 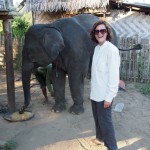 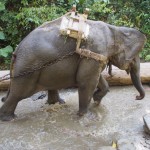 And not just any heffalump, but a real life working heffalump! 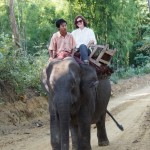 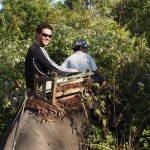 Although mine groaned most ungraciously when I jumped on its back 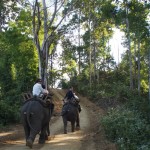 James & Lucy, heading into the future together. Avec heffalumps 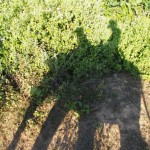 The moment couldn’t be more artistique if it tried 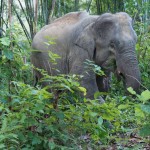 The second morning. This look is elephant for ‘But I haven’t had my wake up espresso yet!’ 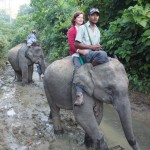 But there is no rest for the wicked, and it is soon off to work… 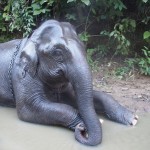 …after a brisk shower, which helps with the general heffalumpy magnificence 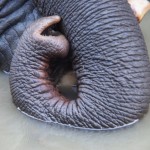 Trunks. Unutterably cool. We both want one. 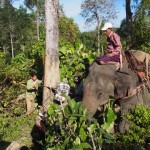 We are soon hard at it, cutting down teak trees 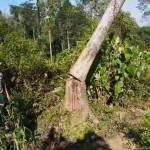 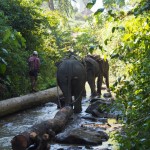 And hauling them off back to the base camp 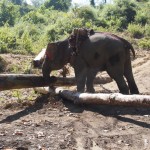 Where the (one ton) logs eventually get stacked in neat piles. All in a day’s work! 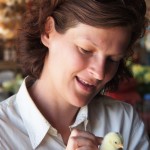 Wildlife abounded. Here is Lucy playing mother hen (while the real mother hen clucked rather indignantly in the background) 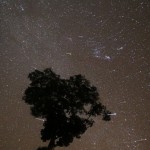 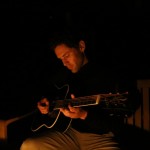 A dram of whisky and a campfire later, I remember that I can actually play the guitar