Yup, it’s early morning and we are at Tsukiji fish market in Tokyo. A huge warren of stalls piled high with every conceivable kind of seafood, and a few others besides. Squat men in wellington boots stride around with single-bladed sashimi knives as tall as they are, committing astonishing acts of butchery on the vast swarms of equally vast tuna fish that flood through here every day. Cabinets full of wildly expensive sea urchin roe, banks and banks of humming aquariums, crab claws, crab sticks, live crabs by the dozen dozen. Red fish, silver fish, black fish, grey fish, white fish and their eggs besides. Whelks, clams, oysters, octopuses (-pi?) and squid of every size and colour. Seaweed, dried and fresh. If it comes out of the sea, it’s here. And it’s probably still alive.

It’s our last morning in Japan. The coffee man (er, that’s me) went out to Starbucks for a seasonal gingerbread latte first thing, but otherwise we are empty (by the way, apparently having the whipped cream topping “on the side” is Against The Rules in Japan. But I needed to separate it from the hot coffee to stop it melting away before I could carry it up 24 floors to a snoozing Lucy. So I had to resort to sleight of hand, trickery (and, er, cup thievery) – result! Anyway, I digress.) We are looking for our favorite sushi restaurant, possibly in the world. And we found it. Of course we couldn’t remember the name, but we remembered the eel grilling station (complete with mini portable flamethrowers) from our last trip, and we found our seats with serious anticipation.

Breakfast. As much sushi as you can possibly eat (and we were trying very, very hard). Include multiple rounds of the most expensive top quality sea eel and the extraordinary fatty tuna. Also Uni (sea urchin) which is so expensive and hard to get right that we had previously thought we were only going to bother with it when we were physically in Hokkaido where the best stuff comes from. All this, plus the usual soups and salads and two big beers. We rolled out of there stuffed to the gills and walking on air. My god it was SO good. 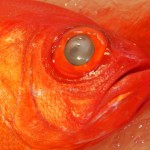 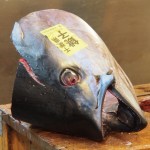 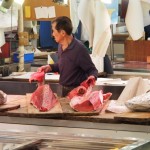 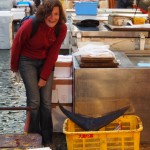 I mean, you’re swimming along minding your own business, and suddenly your tail ends up in a yellow bucket! 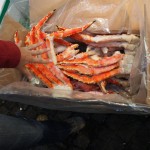 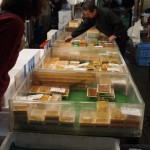 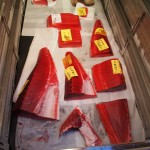 The temptation to buy one of these huge lumps of tuna, a bottle of soy sauce and a couple of napkins was pretty hard to resist 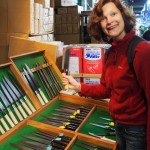 We bought some amazing kitchen knives in Tokyo, so Lucy had plenty of practice waving steel around and looking slightly bonkers 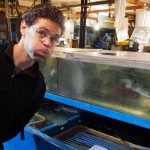 I, on the other hand, was busy introducing myself to a tank full of puffer fish, and not looking bonkers at all

Incidentally, the three tier sushi restaurant test I mentioned a while ago? Try the standard tuna (which is safe and not too expensive) and if it’s really good have the mackerel (which is harder to get right, is horrible when poor quality but when done well is extremely good) and if this is really good try the uni (which is expensive, almost impossible to find done well and frequently disgusting, but a real delicacy when good). So there you are. Happy eating!

We have learned to look after ourselves, Vanuatu-style. Oh yes. Check out this gourmet feast enjoyed on our volcano trek in Ambrym: 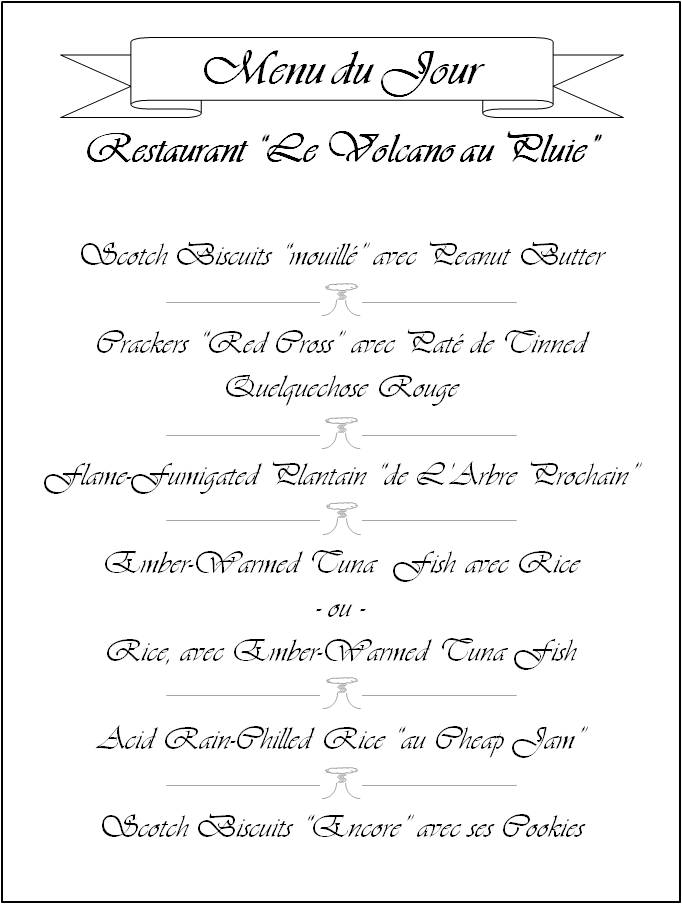 The Sepik is a wildly fertile part of PNG. Fish gleefully jump out of the water at the mere approach of a dugout canoe (to prove this, Josh, our guide, casually leaned out of the boat, stuck his hand in the water and immediately retrieved a fish. Small, but perfectly edible. Respect). Every family will have a “garden”, more akin to a small farm, where they grow staples (sago and bananas), but also a wide range of supporting fruit and veg – coconuts, peanuts, papaya, pineapple, potatoes – you name it, it probably grows here.

We were sort of expecting to eat whatever the locals ate – namely fish and sago together with whatever fresh veggies looked good that day. And we did get to try a sago pancake one day (perhaps as reward for having brought about 70kg of sago flour back to the village in our canoe), which was described with uncanny accuracy by our kind host Sara as “sort of like a biscuit, sort of like rubber”. Indeed. For the record, should you ever be presented with a rubber biscuit, they actually taste ok.

Anyway, as it turned out, we were eating two meals a day: breakfast of bread, jam and peanut butter; and dinner of tuna and noodles (sometimes with an egg mixed in – ooh the excitement!!). Quite why this was, we’re not sure – whether most westerners reaction to rubber biscuits is more negative than ours, whether they feel their local produce is somehow not up to standard, or whether they simply have no desire to eat tuna and noodles themselves, so foist it on us, I just don’t know.

Anyway, for those inclined, below some notes on achieving tuna’n’noodles perfection:

[As an aside, should you have no tuna (for example, when your expensive hotel in the Highlands refuse to serve you lunch and you have to break into the emergency noodles), you can easily make a tasty pad thai – just add a few leftover peanuts and some piri piri sauce. Tasty and exotic!]

Just follow these simple instructions and you’ll have such a feast on your hands that you’ll be eating it 3 days in a row! We did!! 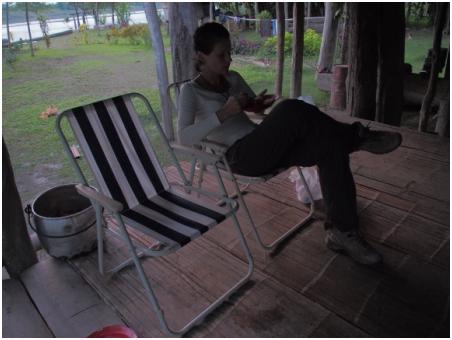 Lucy – enjoying tuna and noodles, for the third time

There have been a number of occasions on this trip where we have been forced to question this assertion. One example: since Lucy was last here, local-character-suppressing globalization has well and truly arrived in South America, Venti Starbucks in one hand, slice of traveler-pleasing pizza in the other. On the other hand, wifi is now ubiquitous, which is pretty cool.

The most egregious example of modernity making things worse, however, came in Santiago de Chile. We had decided to stay in an “Aparthotel”. Strangely this turned out to be unlike the excellent New York Aparthotels in which Lucy and I did our investment banking training in 1999 (thank you DLJ; thank you Wasserstein Perella). I won’t go into the grotty, soulless details here for fear of depressing myself and boring you. Let’s just say that the biscuit was well and truly stolen by the well-advertized “free breakfast is included”. Behold: 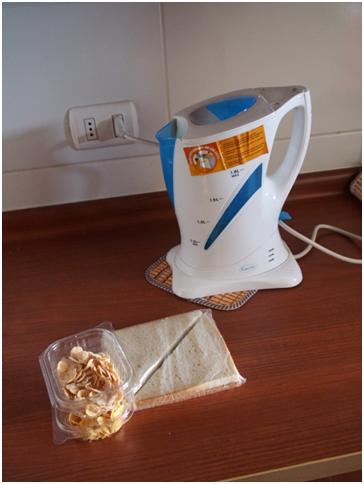 We had completely forgotten about the Guinea Pigs.

We are trying to get into the local swing of things, going to non-touristy restaurants, avoiding the ubiquitous traveler pizzas etc. but in Arequipa we had completely missed out on the local delicacy of “Cuy”. Fortunately, serendipity intervened. We were half way through a self-guided tour of the Monasterio de Santa Catalina where we found – hidden at the back of one of the rather luxurious Nuns’ cells from the 18th Century – a small but effective guinea pig farm. These lovely, cuddly animals make the most amazing alarm call, a little like a modern burglar alarm, and given that the only people who normally come to visit them must be the convent chef, alarm calling they were. It gave us quite a fright, but we soon recovered enough to take this spectacularly lugubrious photo: 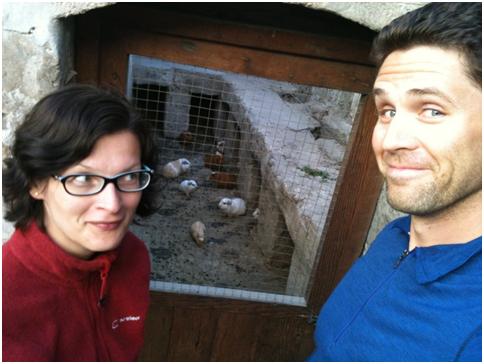 I have titled this shot: "Thoughts of dinner"

It didn’t take us long to find a local restaurant that would dish us up some “Cuy”, and so we settled down with a Pisco Sour apiece for our culinary experience of the day. The verdict? A little like rabbit. Quite tasty, but with not much meat on the bones (sorry Fluffy). Glad we did it; probably wouldn’t repeat it. And in retrospect we are glad that we didn’t get it au naturel, which includes the head and the claws, described by some delightfully English fellow travelers as “like they had got a guinea pig and a frying pan, and BOSH!”. 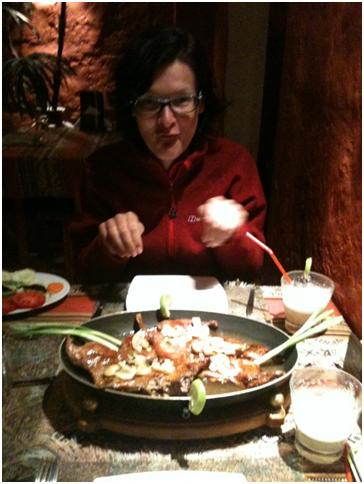 Lonely Planet says it best: “Sorry; scrape the brains back into your ear, because we just blew your mind. That’s right: looks like a cheeseburger, but that ain’t melted cheddar on top. Honestly, it’s great: somehow the stickiness of the peanut butter complements the char grilled edge of the meat. There’s lots of other awesome burgers on the menu, but it’s incumbent on you, dear traveler, to eat the native cuisine of a city. In Hanoi, there’s Pho, in Marrakech, Tagine; and in New Orleans: peanut butter and bacon burger.”

Lucy and I have eaten in some pretty fancy restaurants over our years of living in London and New York, and we have always tried to keep the concept of value separate from the hard fact of price. We will happily spend a little more on a really excellent meal for a special occasion than on a merely average one. But how much more? And given exponential prices at the top end, how far does the relationship stretch? Is an oversized steak in NYC at $33 really ten times as tasty as a Big Mac at $3.29? (let’s just say we don’t eat much steak). We once ate a meal at the Fat Duck in the UK which marred fine dining for us ever since, by establishing a reference price point at which everything you are served has to make you laugh. Décor is a different matter again. Let’s just say that we once had a good but (predictably) expensive and (predictably) not great meal in a restaurant in Las Vegas with $100m of Picassos on the walls.

So this brings us to New Orleans. Ah, New Orleans – home of Crawfish, Gumbo, Jambalaya and the Deep Fried Oyster Sandwich. We had been happily scoffing smoked ribs for a few days in Nashville and Memphis and thought that our diet was perhaps missing a little … class (that well known food group). There are a number of fine restaurants in the Big Easy that reinterpret Cajun cooking for the squeamish, and we had two wonderful nights out at Bayonna and K Paul’s: frog leg buffalo wings, jerk duck, rabbit jambalaya and snickers tarts were washed down with a (half) bottle of Chateau Musar and the occasional mint julep refugee from Kentucky. It was very, very good.

But it wasn’t great. For that, you have to accompany us to a couple of deep, dark dives which shall remain nameless for fear of too many tourists like us. Huge expanses of deep fried chicken livers in grape jelly, a deep fried oyster sandwich as big as my arm, and crawfish jambalaya which may or may not have contained relatives of the large dark rat we saw in the small dark corner. Perhaps it was the shock of eating an only-one-a-day-sized meal for less than $15 a head. Perhaps it was the old adage that the very best food is eaten when you are truly hungry. Whatever. In New Orleans, cheap and dirty is definitely the way to go. 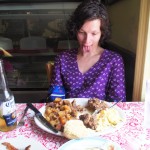 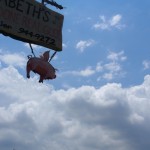 Eat well, at the sign of the flying pig… 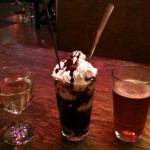