A long, long time ago, in a galaxy far, far away (otherwise known as New York City, c. 2009), James and I met up with an old colleague / friend who was on his way back home from an amazing round the world trip. His personal highlight from the entire period of globetrotting? A voyage to Antarctica. A continent unexplored – we listened, amazed and somewhat saddened by the thought that we were perhaps unlikely ever to make it that far.

Roll the clock forward to 2011 when we were planning our own amazing adventure – scheduled to depart in late February 2011 for 6 months or so. Of course, that put us firmly outside the Antarctic season so, once more, we heaved a small sigh of regret at an opportunity missed.

Then came the slight shift in our plans that resulted in us moving our trip start date to late May. At the time we were pretty devastated and looking everywhere we could for small silver linings to brighten the cloud a little. We also figured out that a RTW ticket is SUBSTANTIALLY cheaper starting and finishing in South America rather than the USA or UK. So much cheaper, in fact, that it might even pay for a trip to – you guessed it – Antarctica. A plan was born.

Of course, at that time we had no real clue how much an Antarctica trip actually cost….

When we found out, after a long and laborious day’s research in Bangkok, we were a bit less certain about this whole affair. Rack rates were pretty pricey – I mean sure, penguins are cute and all, but can anything be THAT cute? We came to the conclusion that we could only really justify this part of the trip if we managed to find ourselves a good deal in some way. Cue many months of finger crossing, followed by some frantic trading of emails with various cruise agents as soon as we arrived in South America.

Result? We got lucky (of course!!), and set sail for the seventh continent. The sun was shining for us, both metaphorically and physically speaking, as we embarked on the first step of our voyage: the Drake Passage, notorious for 15-20 metre swells and the quite spectacular seasickness that accompanies them…. We on the other hand hit a sea high of about 1.5 metres, laughing cheerfully for our entire trip across the Passage, with interruptions only to indulge in our nightly 4 course dinners.

All in all then, we were feeling pretty chipper as we made our first landings of the trip, in Half Moon Island and Deception Bay, in the South Shetland Islands. And there were, indeed, many penguins And some whale bones. And some cool geological stuff that made the beach steam.

BUT: On the other hand, just how cute can penguins (even on a steaming beach) be??  I mean, even with a good deal, this trip is pretty darn expensive. And you can see penguins in Chile. And the 4 course dinners were great and all, but…..

Did we make the right call?? 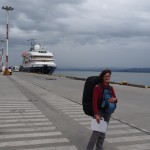 And we’re off! Our ship was rather posher than we were…. 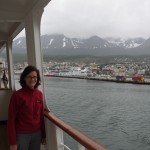 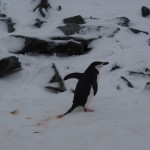 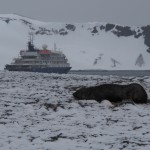 Oh, and a seal, posing conveniently in front of the ship 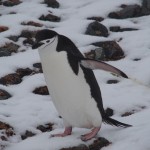 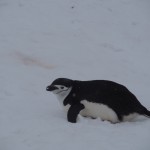 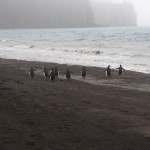 Man, they’re even cute from behind! 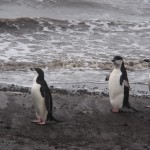 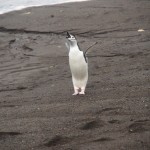 We have a cuteness winner…. 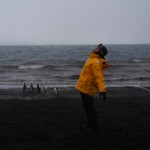 And a loser….How did HE get in the shot!! 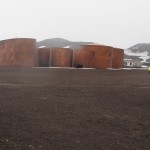 Some cool architecture too. Unfortunately, used to boil up whale oil….